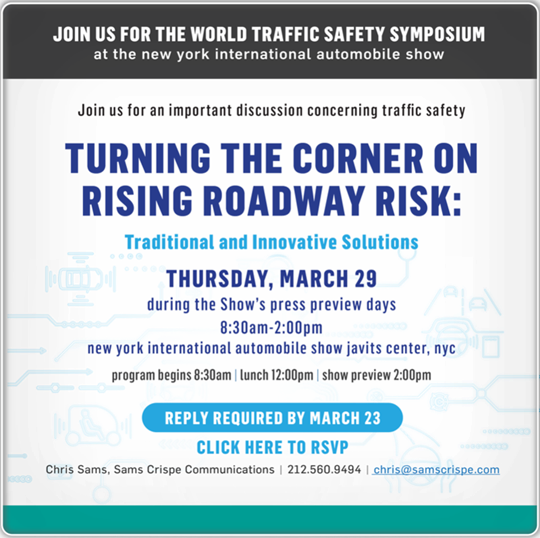 Survive the Drive to Attend the ‘World Traffic Safety Symposium’

“We’re hoping the conference titled; ‘Turning the Corner on Rising Roadway Risks; Traditional and Innovative Solutions’ will address the past two years’ U.S. significant increases in highway crashes and fatalities and verses the expected advances in traffic safety.  ‘The U.S. is now last in comparison among the world’s dozen most economically developed countries in per capita crashing and fatality.’ stated Green, further adding that,  Car crashes are the leading cause of violent injury and lethal mortality on the planet.’

Presenters at the 2017 conference expressed doubts that U.S. drivers can improve, “Behaviorism Doesn’t Work” was stated by a conference presenter who went on to say ‘Drivers are error prone, stating that 93% of all crashes due to driver error. Green commented that here was where the most improvement can take place . . . that the U.S. standards for driver testing and competence are cursory and don’t require expertise in our most dangerous daily activity.  Green also stated that, ‘Pilots and welders, electricians and musicians, commercial truckers and architects have performance standards greater than U.S. drivers’ must meet.’ adding that ‘the pilot who saved the occupants of the airliner landed in the Hudson didn’t do it on autopilot’, the iceberg did not sink the Titanic.  Operator competence is our best preventive resource against these tragedies. Even the tech requires training.’

We have recently experienced public outrage at the many tragedies from deranged individuals’ use of lethal weapons and concerns for ways to deal with it.  We also invite commensurate public concern over the scale of and our personal safety on car crash causes and prevention.  Although unintentional, non-aggressive and inadvertent , car crashes are tragic.

The recent Uber autonomous car crash will surely be a subject of this year’s conference proceedings.

Recent News Items
News Archive
See All News Posts
We offer defensive driver training courses and give presentations about teen driving safety to schools and organizations. Let us know how we can help you.
get in touch
© SurvivetheDrive, Inc. - All Rights Reserved
Back To Top